(Edmonton, AB) As Edmonton gears up for the Canadian Country Music Association’s Country Music Week (September 5-8th, 2013), Gord Bamford is helping to keep the Sound of Music alive over at the Stollery Children’s Hospital.

Bamford is donating $10,000 from his Gord Bamford Charitable Foundation to the Stollery’s Music Therapy Program. The cheque presentation is set for 2:00 p.m., Thursday, September 5, 2013.

“This money will go to support our music therapy program; a program that touches the lives of many children and promotes healthy coping strategies in the midst of hospital treatment,” says Dianne Tuterra, Child Life Team Leader at the Stollery. “The Stollery Children’s Hospital is thrilled to be receiving a $10,000 donation from the Gord Bamford Charitable Foundation. Thanks to ongoing support from community donors like Gord Bamford, we are able to provide a continuing music therapy program.”

The Canadian country musician understands the power of music. “It’s important to give back and I make kids a priority,” explains Bamford, who recently generated $355,000 at his Annual Gord Bamford Charity Golf Classic held on August 7, 2013. “When music can take a child’s pain away, even for just a brief moment, that is truly a powerful gift.”

Music therapy sessions can be done individually at the child’s bedside or in small groups in children’s rooms or in a common area in the unit. There is also a weekly group session on The Beach, the largest playroom at the Stollery. The Music Therapy Program at the Stollery Children’s Hospital began in November of 2011.

Bamford, a nine-time CCMA award winner, and two-time Juno Award nominee, is the lead nominee going into the 2013 CCMA awards being held in Edmonton, September 5-8, 2013. Bamford is nominated for CCMA Fans’ Choice, Album of the Year (presented by Walmart), CMT Video of the Year, Single of the Year, Songwriter of the Year, Record Producer(s) of the Year, and Male Artist of the Year.

The Stollery Children’s Hospital Foundation is dedicated to enhancing health services for children by raising money to support the Stollery Children’s Hospital and programs that promote health, prevent disease and treat illness and injury. Funding provided by the Foundation supports health services for children through education, research, special services and acquisition of equipment.

Bamford’s complete biography can be found on his website at www.gordbamford.com. 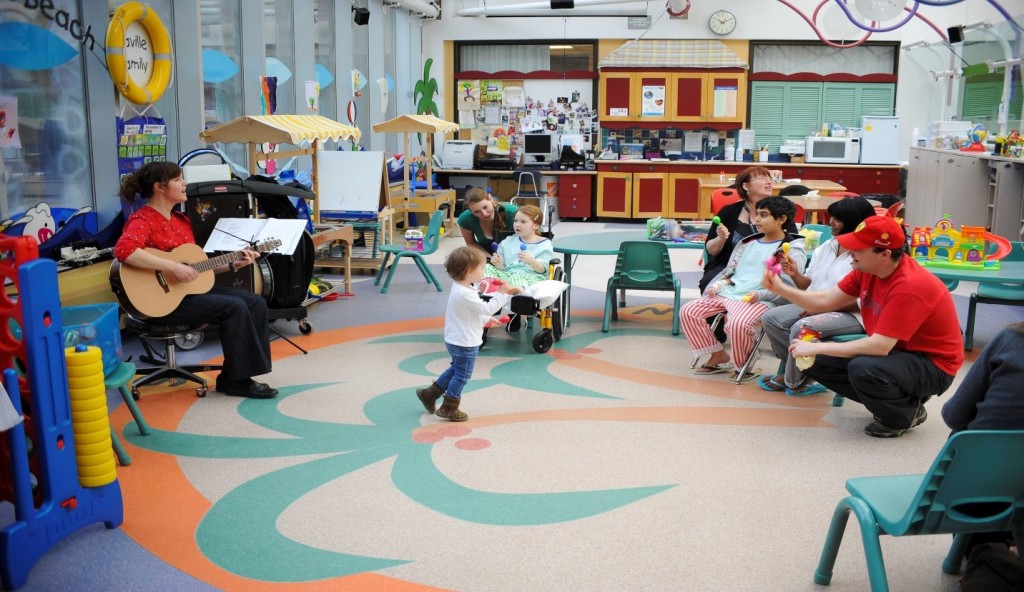 Children are enjoying their weekly music therapy session seen here at the “Beach”, the largest playroom at the Stollery. Says Gord Bamford, “I enjoy connecting with those kids who are so positive, even when faced with such adversity. I am just a guy with a guitar. But I have seen first-hand, the power of music when it comes to healing.”