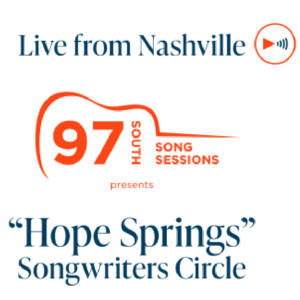 Penticton, British Columbia, May 18, 2021 – 97 South Song Sessions, the group behind Penticton’s summer songwriters festival of the same name (97SouthSongSessions.com), will produce and donate a live-streamed songwriters circle entitled “Hope Springs” to several Canadian charities for their fundraising efforts. The Gord Bamford Foundation will air the event streaming from South X Sea Studios in Nashville, on June 4th at 7pm PST/8pm MDT/10pm EST. The one-hour show will be a combination of storytelling and acoustic performances by the songwriters behind the hits.

“We are so excited at the opportunity to be involved. We love country music and it’s always great to hear the stories of where the songs come from. Huge thanks to everyone at 97 South for your support of the Gord Bamford Foundation and including us in this event.”

Says 97 South Song Sessions Director, Robert Ott, “97 South is thankful that we can support the kids and these incredible charitable communities during such a challenging time with the help of songwriters and all those who have contributed to making this event a reality.”

Tickets and Donation opportunities are available through the charities and the 97 South website.

Gord Bamford Foundation: As a not for profit organization, The Gord Bamford Foundation is passionate about supporting youth. As a Foundation, we provide funds for initiatives that include or involve music, education, health care, sports, and multi-use facilities that benefit youth across Canada. In the fourteen years of operation, the Foundation has generated over $4.2 million dollars, supported more than 63 worthwhile children’s charities which has impacted more than 700,000 children. www.gordbamfordfoundation.com

97 South Song Sessions is an acoustic music performance and storytelling event where award-winning, multi-genre Songwriters and Recording Artists share the stage, entertaining the audience with tales of the creative journey that inspired their hit songs, which they perform throughout the evening. The result is an intimate show that is variously touching and humorous, and certainly unforgettable. The production company, 97 South Holdings Inc, was founded by Robin Ott (President) and music industry entrepreneur Robert Ott (Director). 97 South, named after the major highway, that connects the stunning Okanagan Valley wine region in British Columbia, launched the songwriters festival in Summer 2019. The 2021 festival takes place July 23 & 24, 2021 in Penticton, British Columbia featuring Canadian and US songwriters from the Country, Pop and Rock genres. 97 South Song Sessions is a destination, cultural tourism experience for travellers seeking a bespoke music event. Visit   97   South at www.97southsongsessions.com & follow @97southsongs on Instagram and Facebook.