(Edmonton, AB) Gord Bamford plans on kicking off his 2014 edition of County Music Week in Edmontonby donating $10,000 to the Stollery Children’s Hospital.The monies are coming from Bamford’s Charitable Foundation, and will go to the Stollery’s Music Therapy Program. The cheque presentation is set for *1:30 p.m., Thursday, September 4, 2014.

“The Gord Bamford Charitable Foundation has been a long-time supporter of the Stollery Children’s Hospital Music Therapy program,” says Lois Wolgemuth, Child Life Team Lead/ Program Coordinator, Stollery. “The program allows children to express themselves in a unique and comforting way, enhancing their lives through fun and music. The program helps to alleviate some of the stress that can occur with a hospital stay. It helps children dealing with pain, anxiety and the uncertainty of hospital experiences. Music brings joy and a connection at an emotional level crossing all cultural and language barriers. This important program would not be possible without the generous support of people such as Gord Bamford.”

Bamford’s Charitable Foundation generated a record of $503,000 at its 7th Annual Charity Golf Classic held in central Alberta, August 13 and 14, 2014. Thanks to its success, Bamford says it’s going to make it a lot easier to give back, and one of the reasons why he is using #GordGives on Twitter. “I feel fortunate to have been given a talent to be on stage as an artist; it is my role as a human being to use that stage to also bring awareness to others on how important it is to keep music therapy programs thriving at children’s hospitals. I’m lucky to have seen the positive results that music has with sick children.” Music therapy sessions can be done individually at the child’s bedside or in small groups in children’s rooms or in a common area in the unit. There is also a weekly group session on The Beach, the largest playroom at the Stollery. The Music Therapy Program at the Stollery Children’s Hospital began in November of 2011.

Gord Bamford was the CCMA’s most decorated artist in 2013, amassing five of seven awards. Last fall he kicked off the launch of his 6th studio album “Country Junkie” with a nation-wide tour with Reba, and earned a 2014 JUNO nomination for Country Album of the Year. The GOLD certified lead single ‘When Your Lips Are So Close’ only took eight weeks to hit #1 on the Country chart in the BDS era, making Bamford only the 7th Canadian artist to reach this milestone. Bamford’s “Christmas in Canada” CD also certified PLATINUM in 2014. Bamford is nominated in seven categories for 2014: CCMA Fans’Choice, Single of the Year, Male Artist of the Year, Songwriter of the Year, Record Producer(s) of theYear, Album Design of the Year, and Country Music Program or Special of the Year for Gord Bamford:Christmas in Canada (CMT).

The Stollery Children’s Hospital Foundation is dedicated to enhancing health services for children by raising money to support the Stollery Children’s Hospital and programs that promote health, prevent disease and treat illness and injury. Funding provided by the Foundation supports health services for children through education, research, special services and acquisition of equipment.Bamford’s complete biography can be found on his website at www.gordbamford.com.

*ATTENTION MEDIA:
All Media are asked to gather at 1:20 p.m. at the main entrance of the Walter Mackenzie Centre located on the east side of the building, 8440 112 St., where they will be escorted to the presentation. 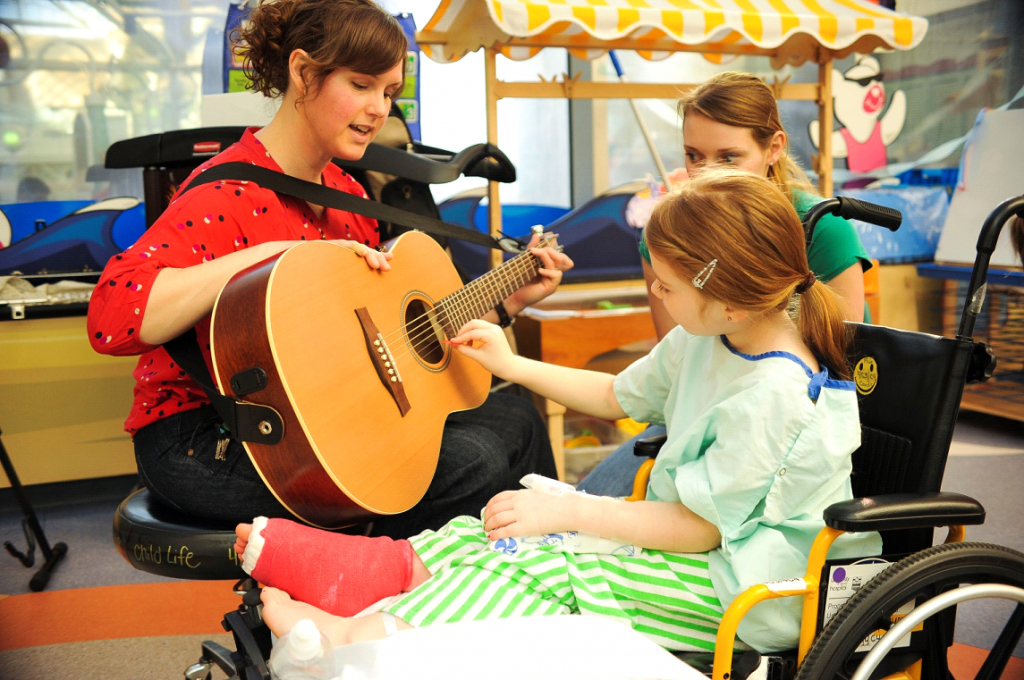 Music therapist is Elizabeth Stolte works with a patient during her “Music on The Beach” program at Edmonton’s Stollery Children’s Hospital.