The Gala took place at the Sheraton Hotel in Red Deer, near Bamford’s hometown of Lacombe, Alberta. Bamford contributes the event’s success to strong community supporters, the music community, and of course the sponsors and volunteers. Alberta-based businesses JEDCO Energy Services served as the event’s title sponsor, with Waschuk Pipeline Construction Ltd along with ETC Event Styling & Décor joining together as the venue sponsors.

Two surprises unfolded during the evening, first, a youngster who is part of the Make-A-Wish program of Northern Alberta was joined up on stage with Gord Bamford who granted him his wish of brand new roping gear so that the young man can continue participating in his favourite pastime. The second, was a visit up on stage from Gord Bamford’s Big Brother from the Big Brothers and Big Sisters of Lacombe & District, one of this year’s featured charities. 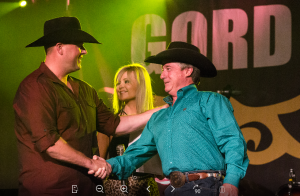 On the golf course, for the first time ever at this tournament, a guest made a hole in one at the Lacombe Golf and Country Club which landed Robert Gardiner a $10,000 cash prize.

Contributing to the fundraising total were 2 private Gord Bamford concerts that were live auctioned off by auctioneer Danny Hooper for $25,000 each. A Top Shelf Experience donated by the Calgary Flames was also an exciting item up for bid. Celebrities and athletes were auctioned off to guests who paid up to $10,000 for the opportunity to have the celebrity join their golf team the following day. The list included, hockey players from the Bentley Generals, Curtis Glencross and Kris Russell, as well as Rodeo Champions Denny Hay, and Davey Shields Jr.

“Central Alberta is a wonderfully strong community that really knows how to rally behind a cause, despite the difficult economic times that Albertans are facing. The organizations we support change lives for the better, and we’re so proud to be part of so many worthwhile causes through our annual event,” said Bamford.

Monies from this event are the main source of fundraising for The Gord Bamford Charitable Foundation and are delivered to a variety of youth-centered charities across the country. The next charity to receive a donation will be the London Children’s Health Foundation who be getting a $10,000 donation during Country Music Week at the upcoming CCMA’s in September.

About the Gord Bamford Charitable Foundation: As a not for profit organization, The Gord Bamford Foundation is passionate about supporting youth. As a Foundation we provide funds for initiatives that include or involve music, education, health care, sports, and multi-use facilities that benefit youth across Canada.